This generic SATA to USB bridge adaptor will be the last one I'll be reviewing for a while, unless I find another more suitable one. I'm already very happy with my JEYI X6 adaptor, but I picked these adaptors up because they were just a tad smaller than then JEYI X6 and I wanted to find out what chipset it used. I picked these up on AliExpress from a seller called SimpleStone, however they no longer sell the item. There are other sellers that sell this item, however, it lacks a model number and thus you must search for it with generic search terms such as "NGFF USB 3.0". You can pick one of these up for around $8 US. This adaptor is available in gold, red, blue and black anodised aluminium. I picked up one of each colour except gold because it looks tacky. Perhaps Apple's products influenced this decision. The enclosure itself measures 60.5mm x 29.7mm x 8.6mm (long x wide x thick) without the USB connector which protrudes by 13.8mm. The tacky white writing on the face (USB3.0 to NGFF(M.2) SSD hard disk box) can be removed easily with acetone. The aluminium enclosure measures approximately 0.8mm thick. It's touch enough for a USB drive, but can be squeezed down a bit with strong fingers. The SSD you intend must not be wider than 22.8mm. The front and end pieces are each held in place by two screws, which screw into countersunk holes. The build quality of the aluminium could be better, but for $8 I'll let it slide. Like with all previously reviewed adaptors, the activity indicator is in the form of a small hole next to the USB connector and not easily visible when the device is plugged in.

The top side of the PCB houses the guts. Like the JEYI X6, it's based on the ASM1153E chipset.

There is what appears to be a 4Mbit SPI flash which is used to store the USB vendor and device ID reported to the host device, as well as any other vendor specific programming. I couldn't find a match for the exact part "PH25Q40B" but a similar SPI flash by Winbond is the 4Mbit "W25Q40B". A 512KBit flash would be enough for the purpose. The SPI flash has been programmed to identify the device as an ASMedia ASMT1051. Looks like the creators just copied the flash from an older product. You can download a dump of my flash here.

The 3.3V rail is regulated by a chip identified as "8521 2030". I couldn't find the correct datasheet for it. I'll just assume it can supply the required power.

The bottom of the PCB houses the M.2 connector which is B-keyed, meaning PCIe 4-lane SSDs will not fit and PCIe 2-lane SSDs will not work. There are holes cut out to support both 2230 (30mm long) and 2242 (42mm long) sized cards and it comes with spare parts for mounting 2230 sized cards.

The LED activity indicator is also on the bottom side, meaning the LED faces down when plugged into a correctly oriented USB port. That makes modding the indicator just a tad more challenging.

Most of the results here are very similar to the original Sintech adaptor I previously reviewed. Please read that review for explanations. I will just gloss over the details here. You can also expect very similar results to the JEYI X6, since its based on the same chipset. Any differences are just part of the margin of error. This is the raw performance of the Transcend SSD connected to an M.2 slot through a SATA3 interface in AHCI mode. The sequential read speeds are on the verge of saturating SATA3's real world throughput. When connected via regular USB3.0 (BOT: Bulk-Only Transfer) through the ASM1153E in this generic adaptor, we see pretty much the same results as the JEYI X6.

As expected, on an OS with UASP support, in this case Windows 10, we are able to connect in UASP mode. 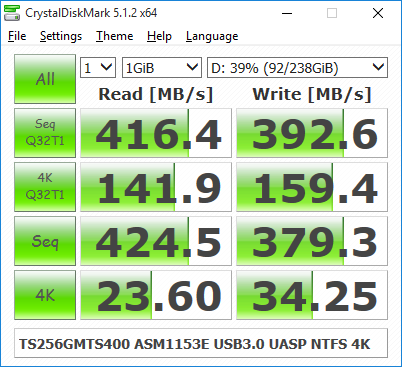 There is also no heating issues with this adaptor and the ASM1153E stayed well under 50 degrees Celsius with an ambient temperature of 20 degrees. 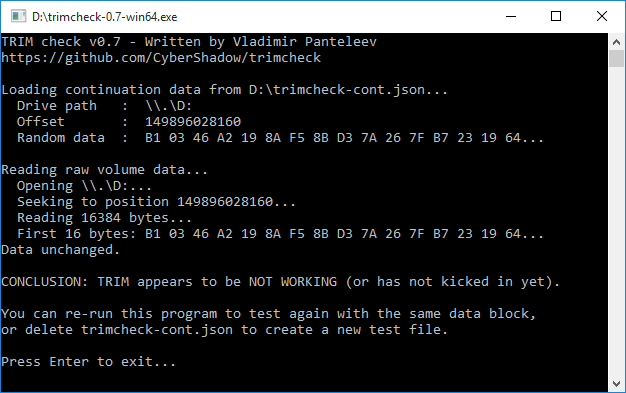 It seems that TRIM is not working for some reason. The adaptor comes with ASMedia firmware version 130926a10000 with UASP enabled, yet TRIM commands don't seem to be taking effect. Perhaps the issue is outdated firmware. I Googled for a ASM1153E firmware update and managed to find a copy of ASMedia MPTool from Plugable. The update file is an SFX archive and can be extracted with 7zip/WinRAR. The extracted package should contain as_mp_Tool v0.3.ini. This file contains parameters which can be programmed into the serial flash.

You can customise manufacturer_string and product_string to anything of your choosing. The product_string is what is shown in the "Safely Remove Hardware" menu. You could set it to something like "Property of Jane Citizen" to deter theft, since most people will not know how to change that string. If you prefer to use the MPTool GUI to adjust settings, you can unlock the program by clicking on on the padlock icon and unlocking with the password asmedia. To program the chip, simply run MPTool.exe, plug in the AMS1153E based adaptor and wait for the program to detect it and then click the blue play button. Unfortunately, firmware version 140509a18280 does not fix the TRIM issue.

This generic adaptor uses a very fast chipset and offers very fast speeds. The TRIM issue is not much of a problem for me and my Transcend SSD as its controller doesn't suffer too badly. The enclosure isn't as premium as the JEYI X6 and can do with some improvements, however, it is the smallest enclosure I could find that works without issues. This would certainly be the best choice if size was the most important issue.

Like with all these adaptors, the LED activity indicator is next to the USB connector and obstructed from view. To make things a bit worse, the LED is on the bottom side of the circuit board with respect to the orientation of the USB connector. My solution is to solder a through-hole LED on the bottom side and bend the leads around the edge of the circuit board to the top side. I drilled a 2.5mm diameter hole on the top side of the enclosure and placed half a desiccant bead into the hole. I stuck a piece of Scotch Magic tape on the inside to hold the half desiccant bead and also diffuse the light for a more even light. Here is the result: